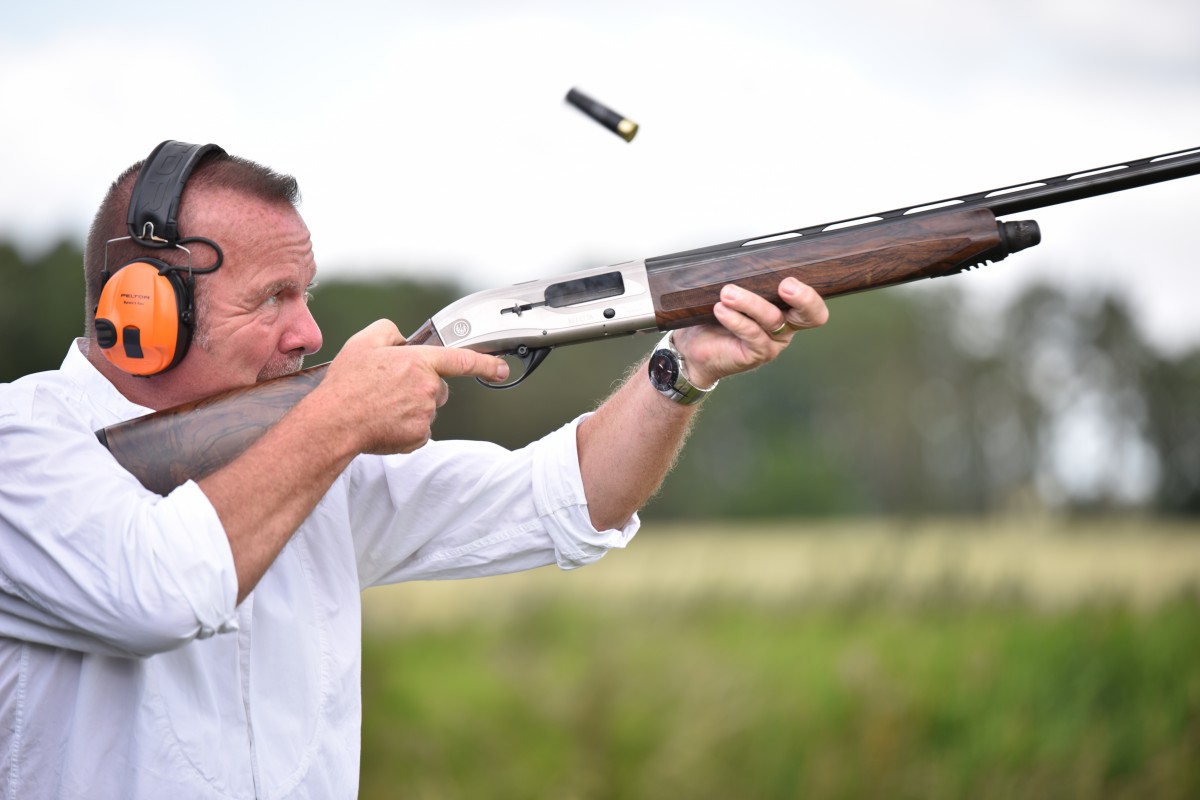 On the flowering cherry and plum trees, “shothole fungus” (Thyrostroma carpophilum formerly called Wilsonomyces carpophilus) overwinters in dormant infected leaf buds, blossom buds and small twig cankers. The fungus then produces spore (called sporulation) in early spring as the leaves are coming out. The most notable symptoms of infection occur on the young leaves as small dark brown, red or purplish spots surrounded by a light green to yellowish halo that 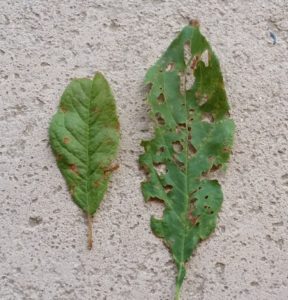 enlarge and become purple with a light center. These spots then drop out of the leaf blade leaving a “shot hole” effect. The numerous holes give a tattered and lacy appearance to the infected leaves making the tree look ravaged and diseased. On some fruit trees, coryneum
blight causes small reddish-brown to purplish spots on the fruit, which appear scabby later in the season. As the warm weather approaches, the leaves often die and drop off the tree. This doesn’t mean the tree has died. It only means that the tree will be forced to use some of its stored energy reserves to produce another set of leaves. If the tree has to use its valuable reserve food to fight this disease year after year, it could weaken the overall health and vigor of the tree making it more susceptible to other diseases.

On crabapple trees, the disease that produce leaf spots is a result of a fungus called apple scab (Venturia enaequalis), which has a similar lifestyles and symptoms as the coryneum blight that attacks cherry and plum trees. The prevention and eradication techniques of these fungal diseases are also similar. According to Oregon State University’s PNW Pest Management Handbook, “The first visible symptoms [of apple scab] on leaves in spring are pale, chlorotic, 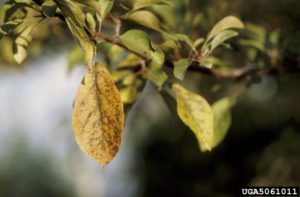 water-soaked spots the size of a pinhead. These enlarge, becoming darker and smoky in appearance, later taking on an olive shade and ultimately a brownish black color. Spots may be any shape but are frequently circular. Young infections often show a radiating spread of fungal tissue through the leaf, and such areas later appear as irregular, brown-colored infections. Diseased leaves can be curled and distorted and often drop early, thus defoliating and weakening the tree.”

So what can you do to protect your ornamental and fruit trees from these debilitating diseases? Prevention is always the best medicine. In the fall, rake up and dispose of all the dead leaves. Avoid overhead watering during the growing season, as leaves must be moist for infection to occur. Some experts recommend pruning out infected twigs and buds, but in reality, this is not practical. Who has the time or energy to go through an entire tree examining every twig and bud? More practically, it is advisable to do everything possible to promote the health and vigor of your trees. This includes regularly thinning their crowns to promote good air circulation thus reducing the likelihood of the fungal spores spreading, applying several inches of mulch (e.g. wood chips, bark dust or composted yard debris) within the drip zone of the tree, keeping competing vegetation (e.g. weeds and grass) away from under the tree, and regularly fertilizing the tree.

Finally, for trees that are infected with coryneum blight or “shothole fungus,” several applications of chemical sprays are recommended. The plant pathologists at Oregon State University recommend three spray applications in the spring at flower petal fall, shuck fall and two weeks later. The experts at Washington State University recommend applying a fungicidal spray in the late fall before the heavy rains start and one more application in the spring after the flower petals have fallen off.

For flowering apple trees with leaf scab, OSU recommends several spring spray applications including the first prior to bud break, one just before the flower opens and the last one just after the flower petals fall.

The fungicides that OSU and WSU recommend for both coryneum blight on plum and cherry trees and leaf scab on crabapple trees have low toxicity, and, if applied properly, are harmless to wildlife including pollinators like bees. Highly effective organic fungicides are also available (e.g. copper and sulfur).

Over the years, Good News Tree Service, Inc. has successfully treated numerous cherry, plum and crabapple trees helping them to exchange their ragged and tattered leafy clothing for a rich-looking robe of healthy, lustrous and vibrant foliage, thus making one’s home more attractive and valuable, and the world a more beautiful and happy place. A good thing to do!

It’s not too early to start formulating a game plan to care for your ailing trees in the new year. For answers to your questions about your tree care needs, call Nathan at (503) 682-9466 or email him through the contact form to make a no cost, no obligation appointment.